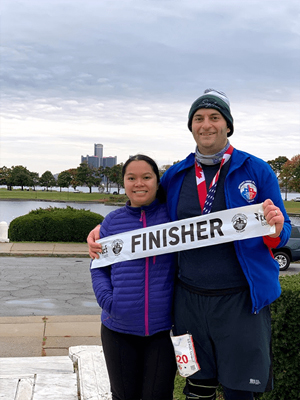 Carl Pfadt began training for the 2020 Detroit Free Press Half Marathon before his first day of chemotherapy at Karmanos Cancer Institute. With an undifferentiated soft tissue sarcoma in his hamstring, Pfadt was not hitting the pavement and training physically; he was setting a goal with daily affirmations. "I began writing the affirmation 'By October 2020, I will be cancer-free and physically prepared to run the Detroit Half Marathon' ten times per day. I have a stack of journals that look like "The Shining." It sounds silly, but repeating this over and over simply eliminated any alternative from my reality. It put my brain in the space of saying, 'This is going to happen,'” Pfadt said.

His determination paid off. The 2020 race was held virtually due to COVID-19, but nevertheless, Pfadt reached his goal and ran 13.1 miles to complete the Detroit Free Press Half Marathon.

Although he lost a portion of his muscle and nerve through surgery, underwent months of physical therapy and went through trial and error with orthotics and braces, he learned a great deal about anatomy and physiology and never lost sight of his goal. His support system also empowered him throughout his cancer journey.

He admits that the first few weeks after surgery were challenging but his wife was by his side at every step. She shared Pfadt’s half marathon goals with family and friends, highlighting progress and using publicity as an accountability tool. She also saw training as a way to encourage family and friends to participate during a year when so many have had to alter the way they think about physical fitness. Pfadt and his wife decided to donate to cancer-focused charities for each friend or family member who participated virtually, resulting in $1,000 given in total.

“My story isn't over - it's really just getting started,” Pfadt said. “I'll never look or feel exactly the same as I did before my diagnosis... but despite all of the challenges, this journey has also provided a lot of blessings. I've strengthened bonds with so many family and friends and grown to appreciate the everyday blessings of life.”

In addition to his generous monetary donation, Pfadt shares some words of wisdom with those undergoing cancer treatment or any challenge in life. “There are certain things in life we cannot control. We can, however, control our reaction to these things.”

Karmanos Cancer Institute honors and celebrates our patients and survivors as they cross finish lines in the battle against cancer. Congratulations to Carl Pfadt on completing the 2020 Detroit Free Press Half Marathon!