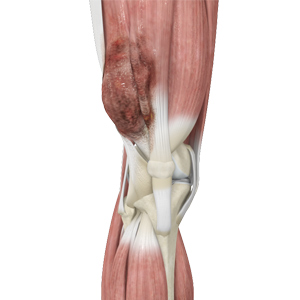 What are Musculoskeletal Tumors?

Musculoskeletal tumors are generally classified into two groups: soft tissue tumors and bone tumors, and they may be considered benign if they are painful but do not spread to other parts of the body, or malignant or cancerous if the cancer cells invade and kill nearby tissue and spread to other parts of the body. If they are malignant or cancerous, your physician will determine if it is a primary cancer, where the cancer cells originate within the musculoskeletal system or a secondary cancer, which means the cancer has begun in another area of the body but the cells have spread to the system.

Both benign and malignant tumors could arise from any bony tissue or mesenchymal soft tissue of the extremities, shoulder, girdle, pelvis, or the axial skeleton. Almost all tumors originate from one of the different histologic types of tissue that involve the musculoskeletal system: bone (osteoid-forming tumors), cartilage (chondroid-forming tumors), and muscle, fat or fibrous connective tissue (soft tissue tumors).

Some of the common types of musculoskeletal tumors include the following:

The causes of most musculoskeletal tumors are unknown, but some factors that increase the risk include:

Some of the common symptoms of musculoskeletal tumors include:

What Happens if Musculoskeletal Tumors are Left Untreated?

If a musculoskeletal tumor is allowed to progress without treatment, symptoms get worse and new symptoms develop over time. As a tumor grows, cancer cells multiply and spread to other parts of the body. Cancer cells invade key organs like the intestines, lungs, brain, liver, and kidneys and interfere with bodily functions that are necessary to live, ultimately leading to death.

In order to diagnose musculoskeletal tumors, your doctor may order the following diagnostic tests:

There are 3 approaches to treat musculoskeletal tumors including surgery, radiation therapy, and chemotherapy.

Surgery: This approach aims to remove the tumor and some of the healthy bone tissue that surrounds it. If some of the cancer is left behind, it may continue to grow and eventually spread.

Limb-sparing surgery, also known as limb salvage surgery, means that surgical intervention occurs without having to amputate the limb. The surgeon may take some bone from another part of the body to replace lost bone, or an artificial bone may be fitted. In some cases, however, amputation of a limb may be necessary.

Some of the common surgeries include:

Radiation Therapy: Radiotherapy is commonly used in the treatment of many cancer types. It involves the use of high-energy X-rays or particles to destroy cancer cells. Radiotherapy works by damaging the DNA inside the tumor cells and preventing them from reproducing.

Radiotherapy can be used to:

Combination therapy is radiotherapy combined with another type of therapy. This may be more effective in some cases.

Chemoradiation, or radiotherapy combined with chemotherapy, may also be used.

Chemotherapy: Chemotherapy involves the use of chemicals to treat disease. More specifically, it refers to the destruction of cancer cells. The possible objectives of chemotherapy include:

Chemotherapy may also help to relieve symptoms and is more frequently used in patients with advanced cancer.